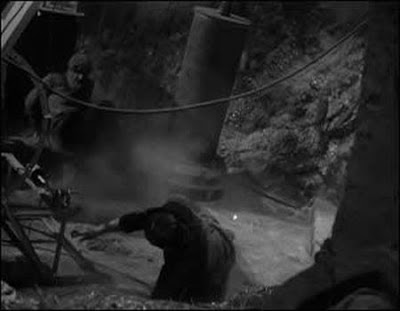 When the mute and the beast meet at last
The dispute should at least be a blast
But the foes hear a BLAM!
Someone blows up the dam!
And the brutes get deceased -- it's half-assed.

Béla Lugosi is The Monster, Lon Chaney Jr is the Wolf Man, in Frankenstein Meets the Wolf Man (1943). As originally shot, The Monster was not mute. At the end of the previous film in the series, he had the brain and voice of Ygor, a character also played by Lugosi. But preview audiences for Meets apparently didn't respond well to The Monster speaking with a Hungarian accent, and so his dialog was cut.
Posted by surly hack at 2:00 AM