Bela isn't cut out for the mob
He can't chisel or flout rules or rob
In mad science, as vamp,
He's a lion, the champ
In this biz he's a doubtful old slob.

Black Friday (Arthur Lubin; 1940): Béla Lugosi was originally cast as the brain-swapping scientist, but when Boris Karloff decided to switch roles, Lugosi was given the secondary part of a gangster. Pictured with Lugosi are Raymond Bailey and Stanley Ridges.
Posted by surly hack at 3:30 AM No comments:

With a range that is...well, isn't vast,
As a gangster poor Bela's miscast
Out of place as a tough
He's a waste in this stuff
It's with fangs he excels and will last.

Béla Lugosi plays mobster Eric Marnay in Black Friday (Arthur Lubin; 1940). Left to right: Lugosi, Paul Fix, Edmund MacDonald, and Raymond Bailey. Fix later played the marshal on The Rifleman, MacDonald picked up a hitcher in Detour, and Bailey ran a bank on The Beverly Hillbillies.
Posted by surly hack at 3:30 AM No comments: 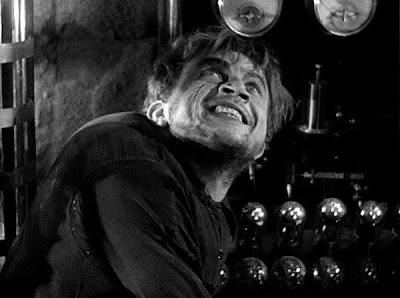 With a setting and lighting Germanic
In a sweat, he's uptight, almost manic
Lightning hits, thunder cracks
Little Fritz can't relax
His pants wet as his fright turns to panic.

Dwight Frye as hunchback Fritz in Frankenstein (James Whale; 1931). Our Dwight Frye-Days feature makes a comeback.
Posted by surly hack at 3:30 AM No comments: 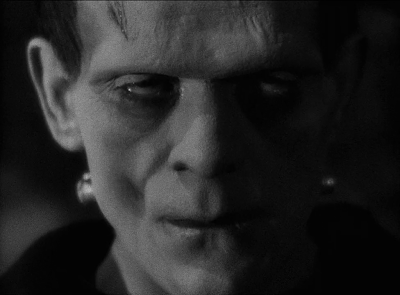 With a ganef-pinched brain in his head,
Was the monster insane as they said?
When this scourge was created
Any urge was G-rated
But, despondent, in pain, he saw red.

Boris Karloff is the memorable monster of Frankenstein (James Whale, 1931).
Posted by surly hack at 3:30 AM No comments: Need a robber of caskets by night?
Not a problem, just ask quirky Dwight
Though a bit of a jerk
And unfit for most work,
The poor slob finds the task a delight.

Mute monster? Eschew such a role!
Bela wants scenes to chew: why play troll?
So the thing goes to Boris
Who flings his thesaurus
And he's haunting, imbued with a soul.

Bela Lugosi famously turned down role of the Monster in Frankenstein (James Whale; 1931), feeling it didn't have any lines. The role went to Karloff, and helped to make him famous.
Posted by surly hack at 3:30 AM No comments:

Borne In a Trunk 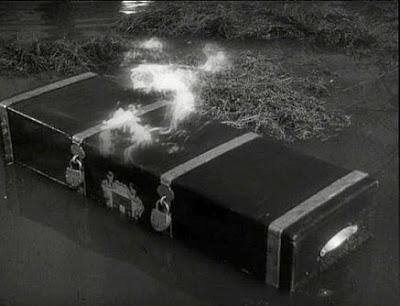 Man of mystery, shameless, perverse
In a mist he will gamely disperse
When he's shipped in a chest
It's equipped with a crest
Who could miss it? His name's in reverse.

These gnarly film horrors are three
From snarling Pete Lorre you'll flee
While Bela Lugosi
With hell-spawn gets cozy
Boris Karloff will pour you some tea.

Bela Lugosi, Peter Lorre, and Boris Karloff have fun in You'll Find Out (David Butler; 1940). Title sandwich by Donald B. Benson.
Posted by surly hack at 3:30 AM No comments:

The Exception That Proves the Ghoul 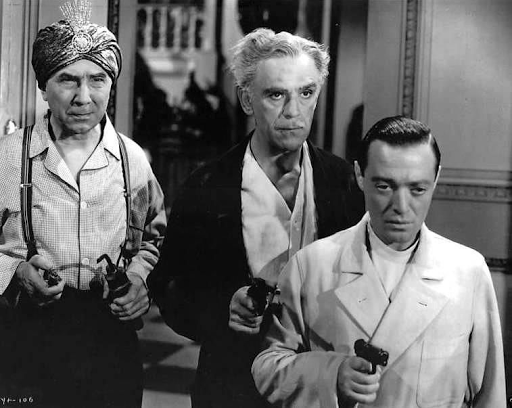 Peter's loose-lipped and swilling, quite tight
Bela's sluiced to the gills every night
Amid drink strong and heady
One stinker stays steady
No abuse of distiller's delight.

Peter Lorre, Bela Lugosi, and Boris Karloff have fun in the otherwise forgettable You'll Find Out (David Butler; 1940).
Posted by surly hack at 3:30 AM No comments: 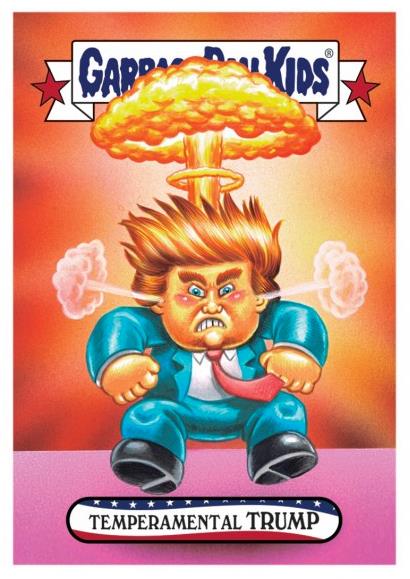 D. Trump is a new kind of bad
He tweets his opponents are "sad"
He wins yet he's sore,
Thin-skinned, and, what's more
The creep is a indebted to Vlad. 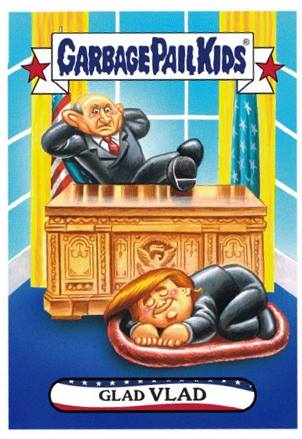 Art by Brent Engstrom for Topps! Here's his blog.
Posted by surly hack at 4:55 PM No comments:

From Beer to Eternity

Once burned by a little ol' cross
You adjourned to start hitting the sauce
As the former king vamp,
Now performing in camp,
You've learned to submit to such dross.

Top: Edward Van Sloan and Bela Lugosi in Dracula (Tod Browning; 1931). Above: Bela Lugosi and Ian Wilson in Mother Riley Meets the Vampire, also known as Vampire Over London and My Son the Vampire (John Gilling; 1952).
Posted by surly hack at 3:30 AM No comments: 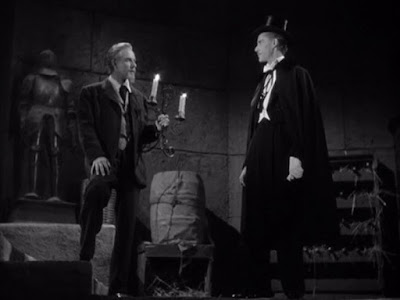 This bat wants to crash in your cellar
He's natty, his fashion sense stellar
But he'll do things perverse
To your beautiful nurse
For a rat he's a passionate feller.

Half-shot, you've been losing plum roles.
Your lot? Playing peasants and proles.
No crown for the Count,
Now down for the count.
Ask not for whom, Bela, it tolls.

In The Wolf Man (George Waggner; 1941), Lon Chaney Jr plays the title monster; In a supporting role, Bela Lugosi plays Bela the gypsy.
Posted by surly hack at 3:30 AM No comments: 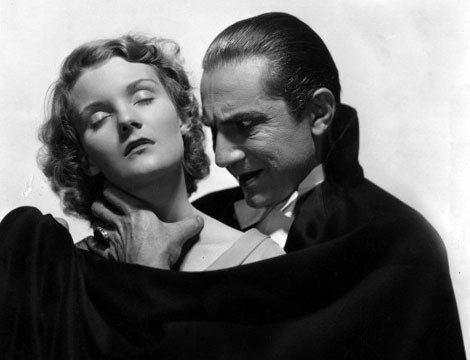 He'll select neither Zin nor Merlot
Will say "Blecch!" to a winning Bordeaux
Eschew juice of the grape
But cut loose on the nape
From the neck Bela's dinner doth flow.

Bela Lugosi goes for the throat of Helen Chandler in Dracula (Tod Browning, 1931).
Posted by surly hack at 3:30 AM No comments:

It's a shame your acclaim took a beating
But then, fame is a dame that is fleeting
Wags exclaim "He's a wrap!"
As your name adorns crap
Who can blame those who came to this 'meeting'?

No, Bela Lugosi doesn't play Bela Lugosi in Bela Lugosi Meets a Brooklyn Gorilla (William Beaudine; 1952). His character's name is Dr Zabor.
Posted by surly hack at 3:30 AM No comments:

Days of Wine and Bozos 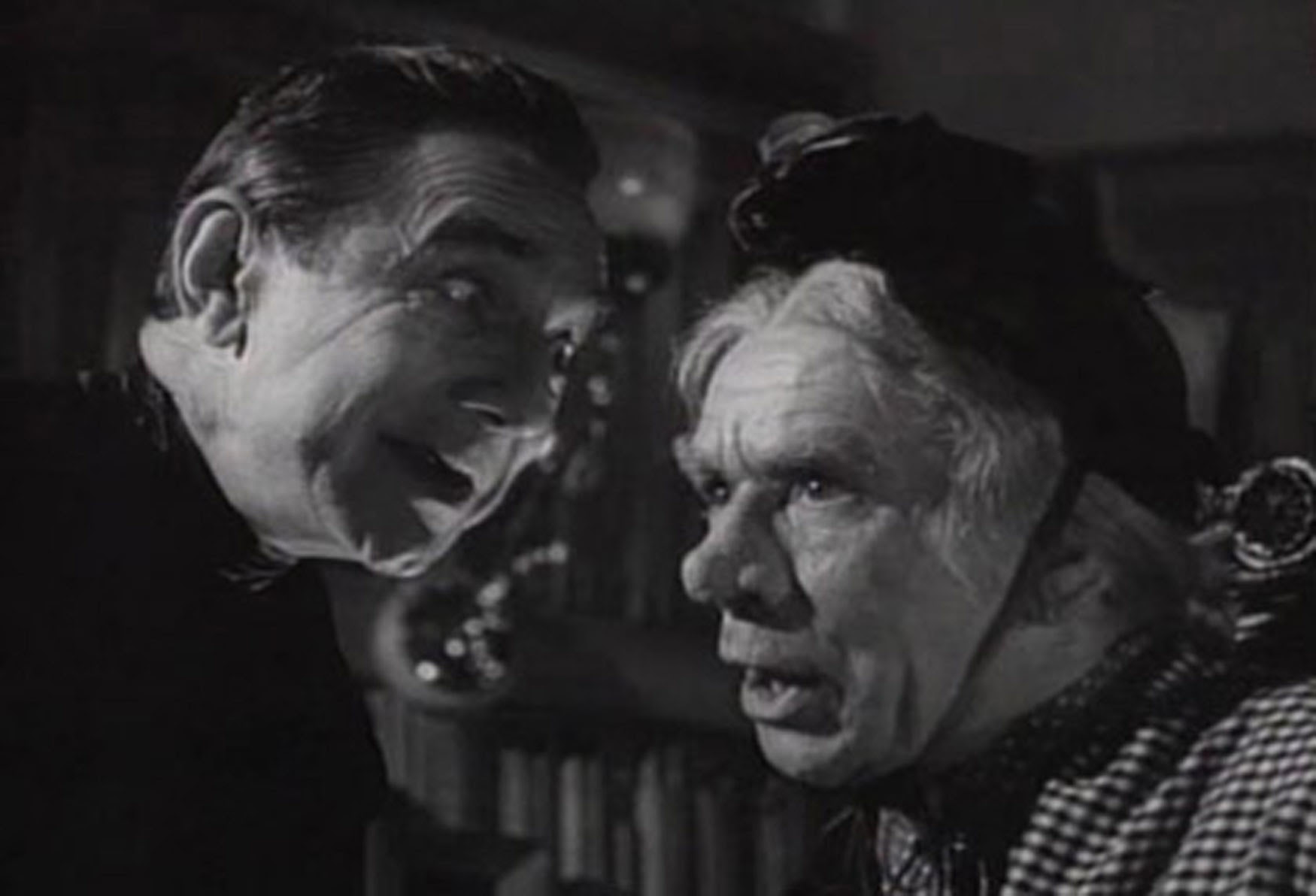 The Bela that we know was scary
Till forced by the vino to tarry
With clowns Bud and Lou,
Mother Riley (It's true!),
And finally fake Dino and Jerry. 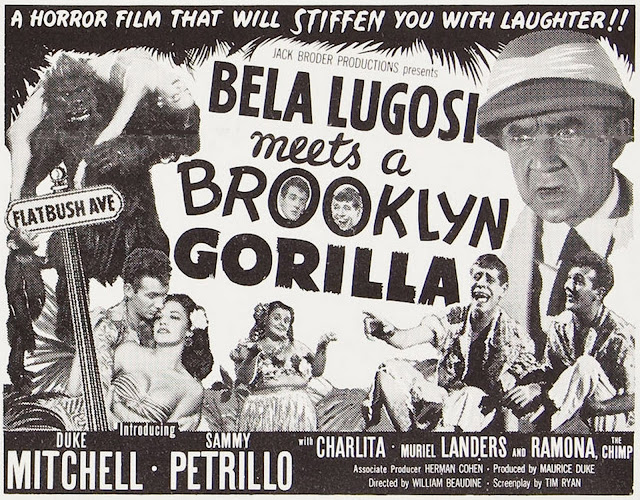 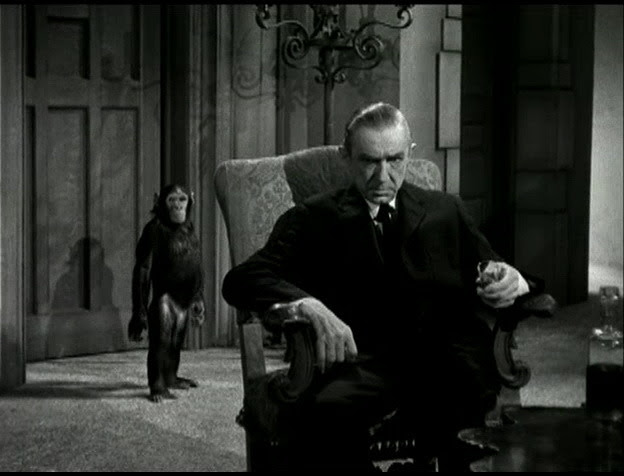 Enthused, full of lust, almost drooling,
You used to bring gusto to ghouling
But you landed in traction
And abandoned all action
Now abusing, it's just too damn grueling.

Bela Lugosi contemplates his career trajectory in Bela Lugosi Meets a Brooklyn Gorilla (William Beaudine; 1952). For many years, Lugosi had been receiving treatment for sciatic neuritis, and eventually he became addicted to morphine and methadone.
Posted by surly hack at 3:30 AM No comments: 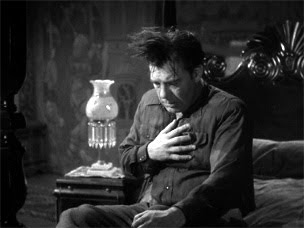 This werewolf is soggy and stinking
Not scary, just groggy and blinking
There's a reason he's bleary
And queasy, not eerie
It's the hair of the dog he's been drinking.

Lon Chaney Jr. as tormented Larry Talbot, The Wolf Man (George Waggner, 1941).
Posted by surly hack at 3:30 AM No comments: 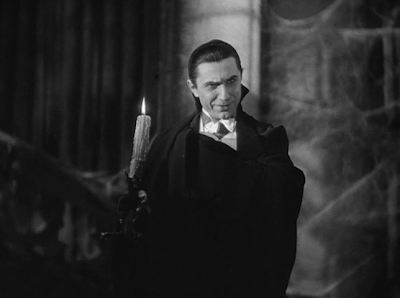 "I never drink wine," says Count Drac
But he revels in pints for a snack
At a gash in your throat
He will gnash, slurp and gloat
A beverage fine as cognac.

No pallor: his cheeks are quite ruddy
But gallons of leaks red and bloody
Didn't get Bela pickled
The wetness that trickled
Was formaldehyde, reeking and cruddy.

When his rancid old canines have sunk in

Your chance to see daylight has shrunken
You'll be bled for nutrition
And he'll spread his condition
Then prance off all swaying and drunken.

Vampira (Maila Nurmi) and Bela Lugosi appear on The Red Skelton Show (1954). Title and assist by antsy David Cairns.
Posted by surly hack at 3:30 AM No comments: