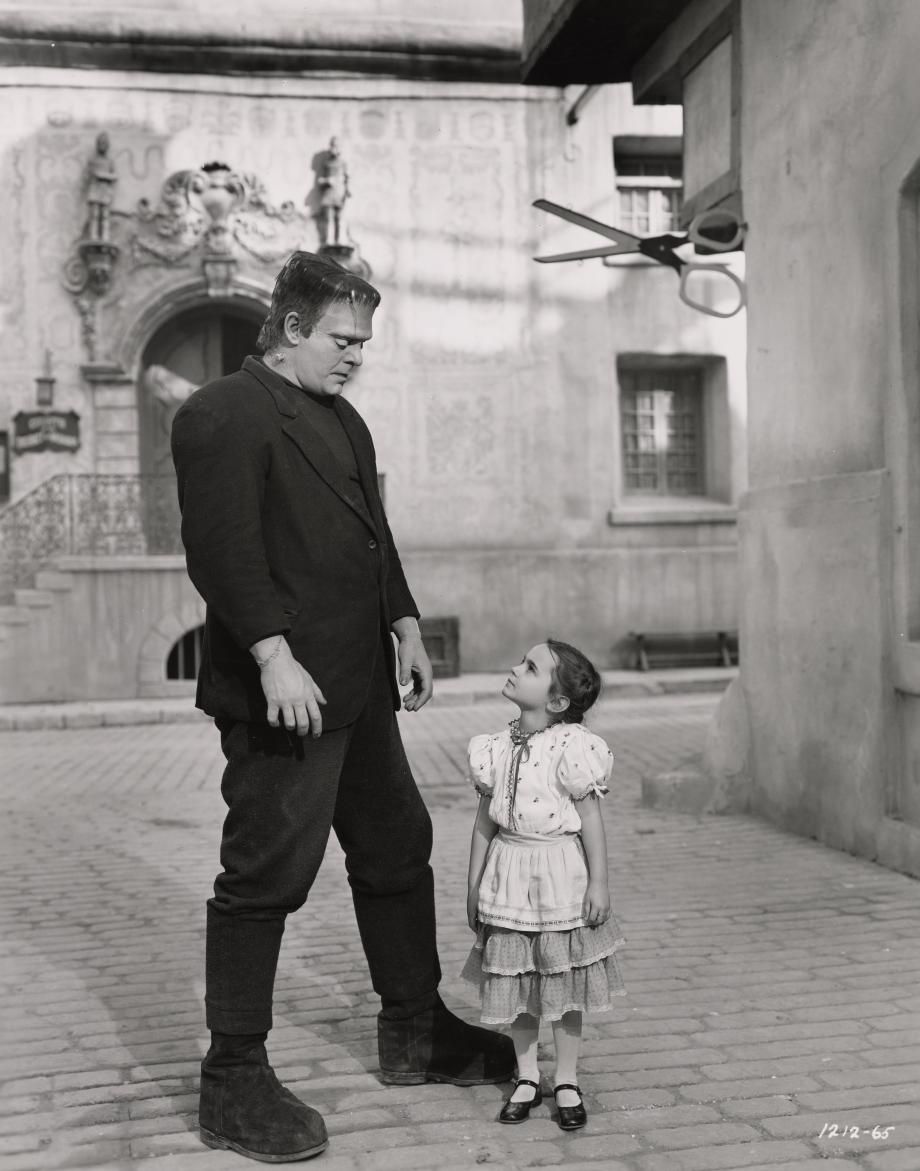 Don't scorn me, you know what I'm like
If cornered, a blow I will strike
It's no life on the run
Constant strife, never fun
Forlorn, I could go for this tyke.

The Kharis that Ate Kharis 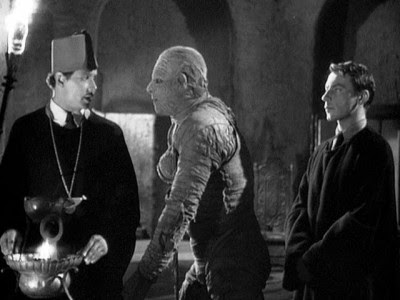 Without fail Kharis ekes out the hours
It's own tail each lame sequel devours
Self-cannibalistic
No elan, inartistic
It grows stale and antique, as it sours.

The Mummy's Curse (Leslie Goodwins; 1944): In this, the last of the sequels, the Mummy (Lon Chaney Jr) plays stooge to high priest Ilzor (Peter Coe) and acolyte Ragheb (Martin Kosleck).
Posted by surly hack at 3:30 AM No comments:

A fairly high priest, we assume
Has Kharis released from his tomb
But then, in a fire
Again, he'll expire
But terror, now ceased, will resume.

Cowboy star Tom Tyler and George Zucco in Universal's first sequel to the Mummy from Universal, The Mummy's Hand (Christy Cabanne; 1940).
Posted by surly hack at 3:30 AM No comments: 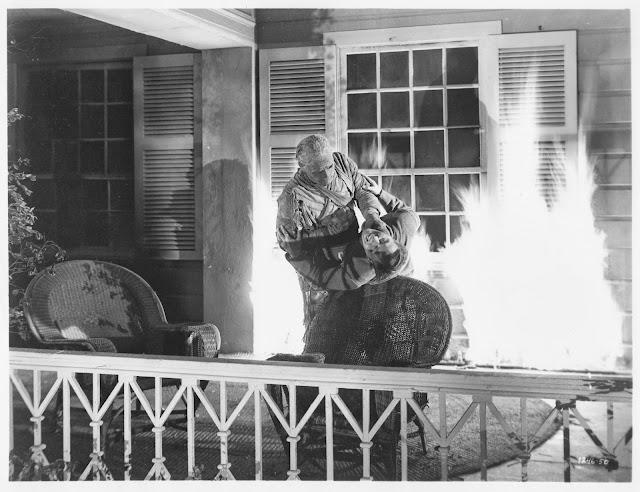 His fate has been highly unjust
He hates to comply, but he must
Once dashing, now crusty
Old passions grown dusty
So dated and dry he'll combust.

The Mummy strangles some guy on a porch: Lon Chaney Jr in The Mummy's Tomb (Harold Young; 1942). Title by Mesquiter Donald B. Benson.
Posted by surly hack at 3:30 AM No comments:

First one thinks he is burned in a fire
Then he sinks, unconcerned, in a mire
Under walls that collapse
There's no call to play taps
Mummy finks, we have learned, don't expire.

Lon Chaney Jr drags his way through The Mummy's Curse (Leslie Goodwins; 1944). The Mummy appears to perish at the end of every film, but we know better. Title by Donald Benson, guaranteed.
Posted by surly hack at 3:30 AM No comments: 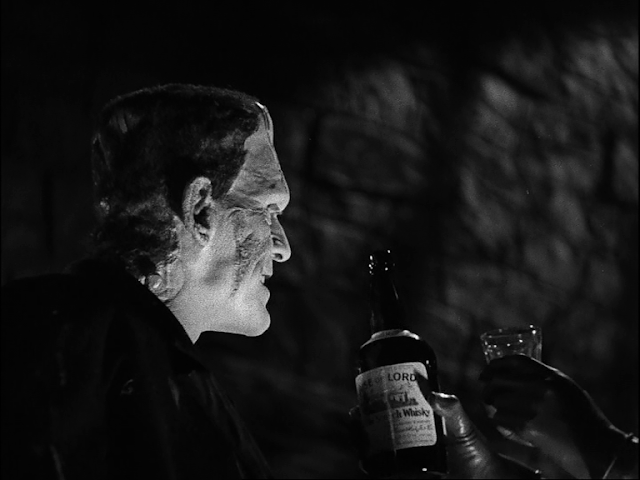 As drunk as a lord, swilling scotch
This flunky's therefore not nop-notch
He'd have liked a gin rickey
But he's spiked with a mickey
Hits the bunk, where he snores, leaves a blotch.
David Cairns

Dr. Pretorius offers the Monster ( Boris Karloff) a knockout cocktail of House of Lords whiskey in Bride of Frankenstein (James Whale; 1935). Title by smashing Donald B. Benson.
Posted by surly hack at 3:30 AM No comments:

Hope for the Rest, Expect the Versed 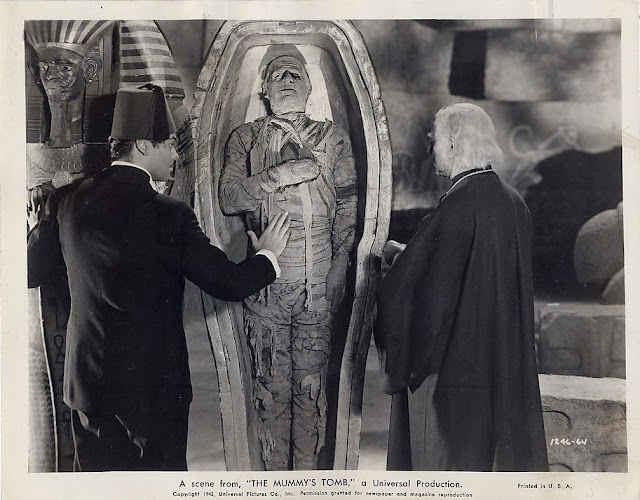 Though prepped for an infinite nap
He's kept by his masters on tap
And slogs overtime
In blogs full of rhyme
Except that these rhymes never wrap.

Turhan Bey and George Zucco inspect The Mummy's Tomb (Harold Young; 1942). The Mummy being Lon Chaney Jr, of course. We'll all need a nap when the gobbling is over. Happy Thanksgiving from the turkeys at LimerWrecks.
Posted by surly hack at 3:30 AM 2 comments: 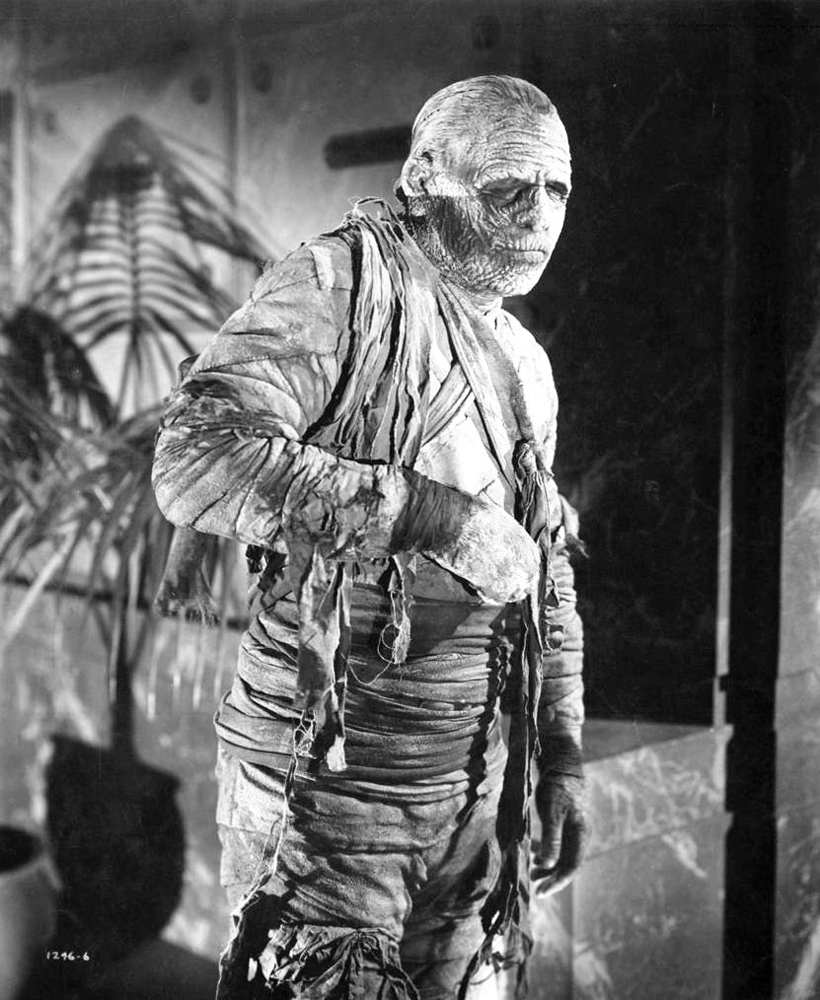 The inaugural Mummy just glows
Now this slogger looks bummed, comatose
These sequels just prove he
Can creak through a movie
Which doggerel sums more than prose.

Lon Chaney Jr wishes he could escape The Mummy's Tomb (Harold Young; 1942).
Posted by surly hack at 3:30 AM No comments:

He staggers about, he's half-lame
Looks haggard, no doubt off his game
How can one defeat him?
Don't panic, reheat him!
The raggedy lout turns to flame.

Lon Chaney Jr. (or his stunt double) burns in The Mummy's Tomb (Harold Young; 1942). Title by the match king, David Cairns.
Posted by surly hack at 3:30 AM No comments: 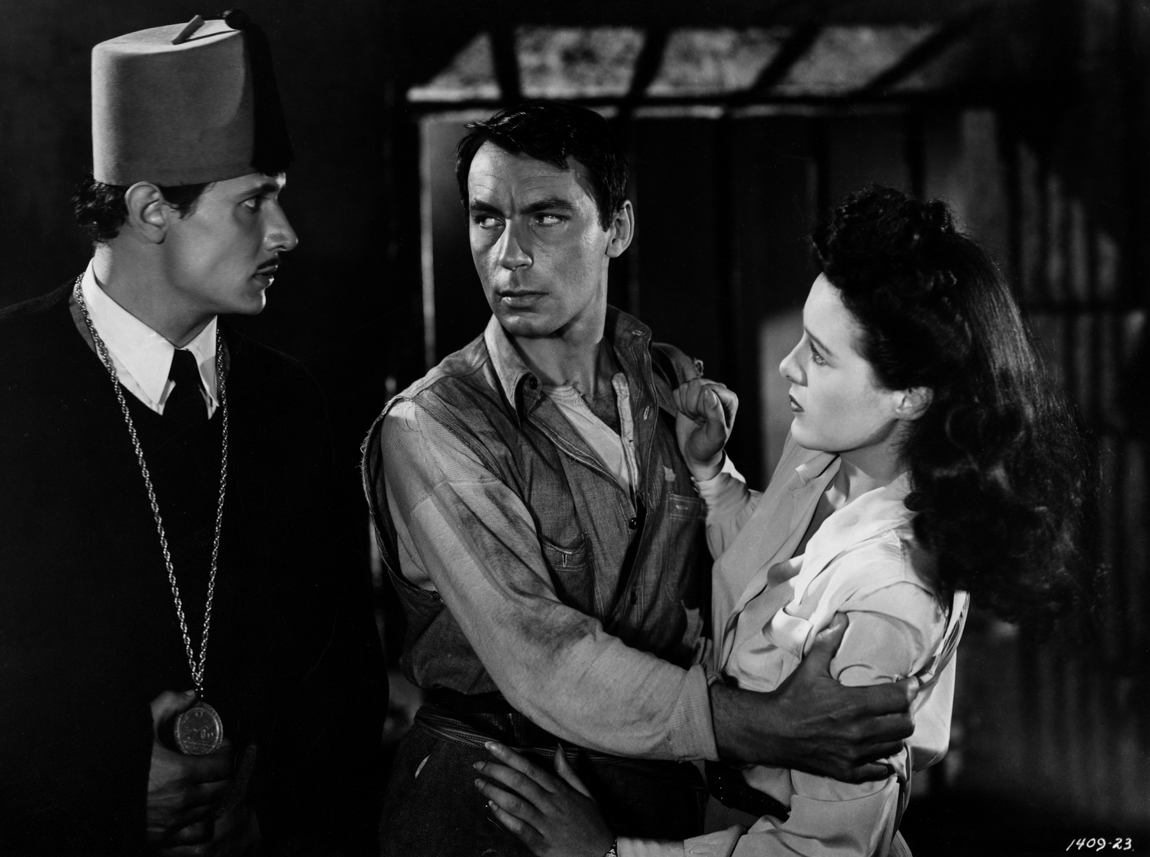 These bums, though they're priests, can't be trusted
For a tumble the beasts have both lusted
To this perky brunette
The jerks pose a threat
The Mummy, at least, is disgusted.

High priest Ilzor (Peter Coe), acolyte Ragheb (Martin Kosleck), and Betty Walsh (Kay Harding), in The Mummy's Curse (Leslie Goodwins; 1944). Edit by David Cairns, out there at Shadowplay.
Posted by surly hack at 3:30 AM No comments: 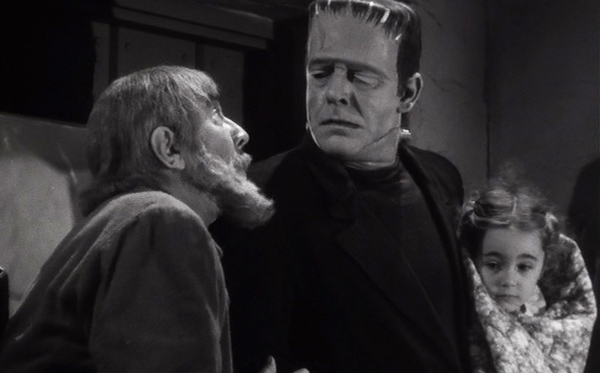 The monster's aware that he's mental
And wants to be social and gentle.
He thinks he'd be sane
With a little girl's brain
And doesn't grasp harm incidental. 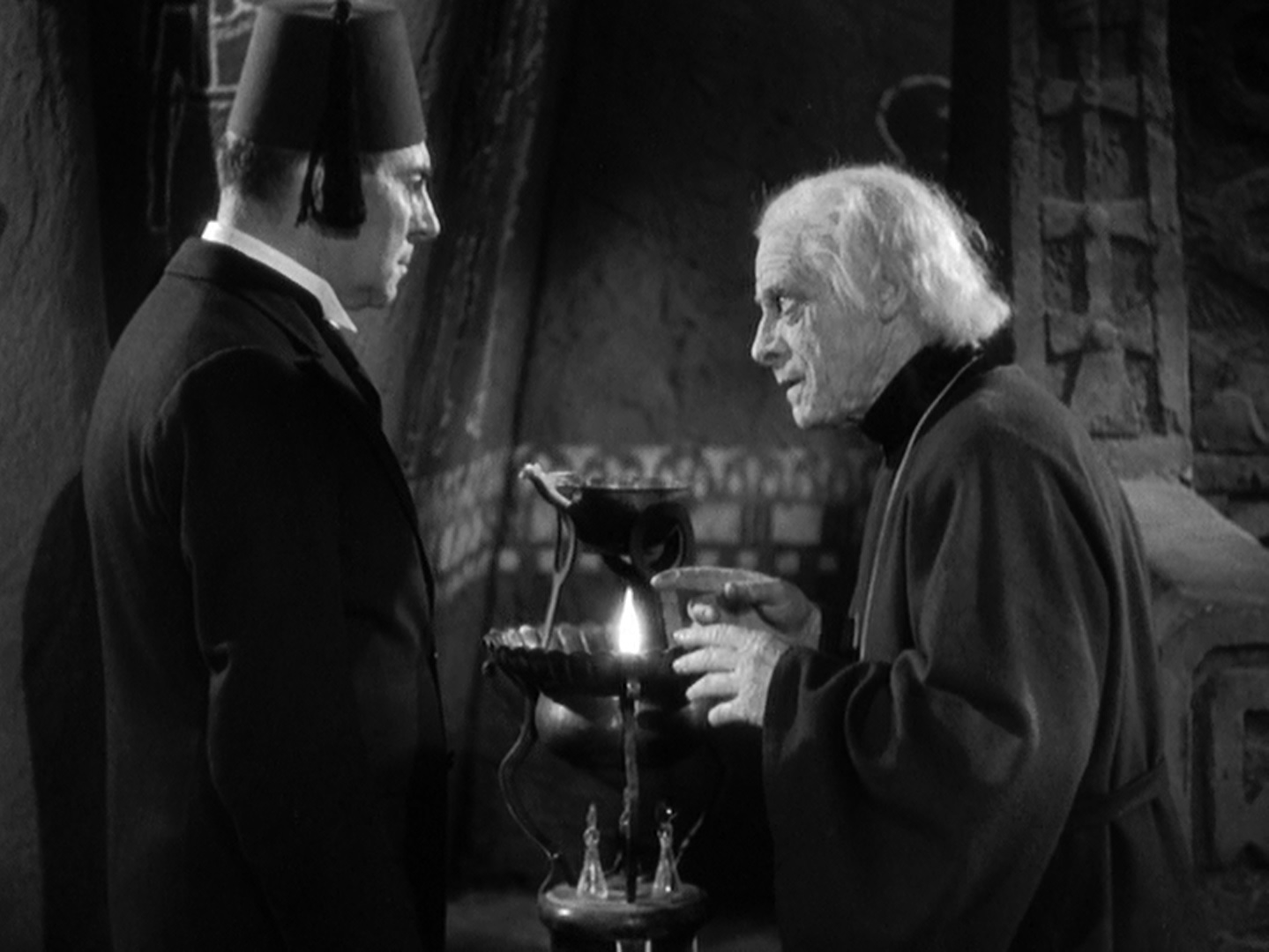 In the deep Middle East there's a cult
Where they keep a high priest to consult
When some dopes from the West
Go and open a chest
An old creep gets released as result.

Priests of Karnak George Zucco and Eduardo Ciannelli conspire in The Mummy's Hand (Christy Cabanne; 1940).
Posted by surly hack at 3:30 AM No comments:

Silence of the Ham

He'd squeal, but he's mute so can't say
What he feels for this beaut on display
The princess he'd mourn
Has since been reborn
And really looks cute, sans decay. 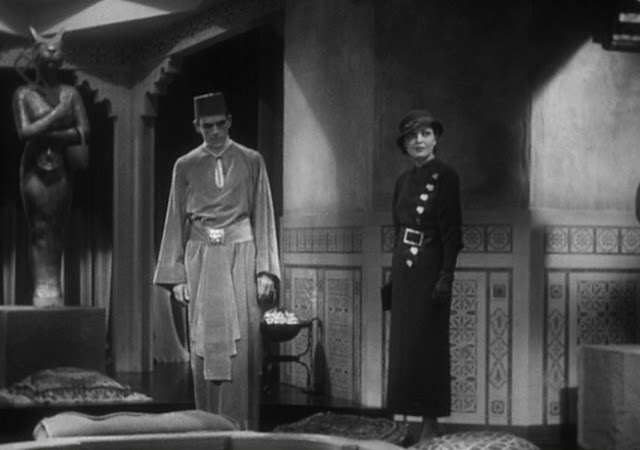 It's easy to see there's no chance.
He's wheezy and doesn't wear pants.
She's reincarnated
To be far less dated --
A BC and AD romance. 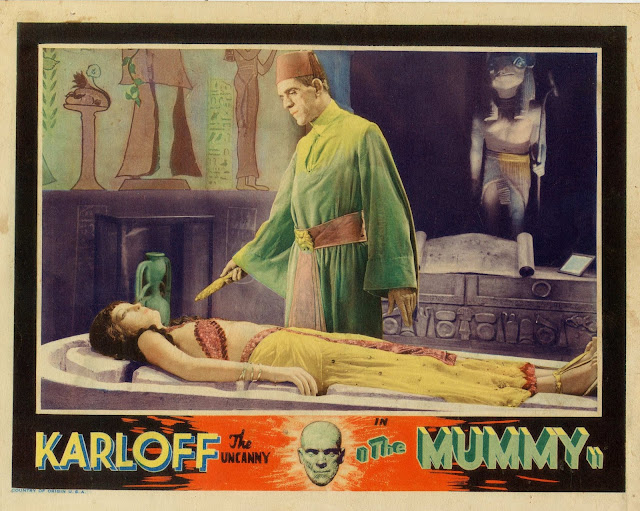 You can’t win her back by duress
Dark rants and attacks won't impress
No dagger will serve
To bag her, you perv
Romantic? You lack all finesse.

Boris Karloff and Zita Johann in a lobby card for The Mummy (Karl Freund; 1932).
Posted by surly hack at 3:30 AM No comments: 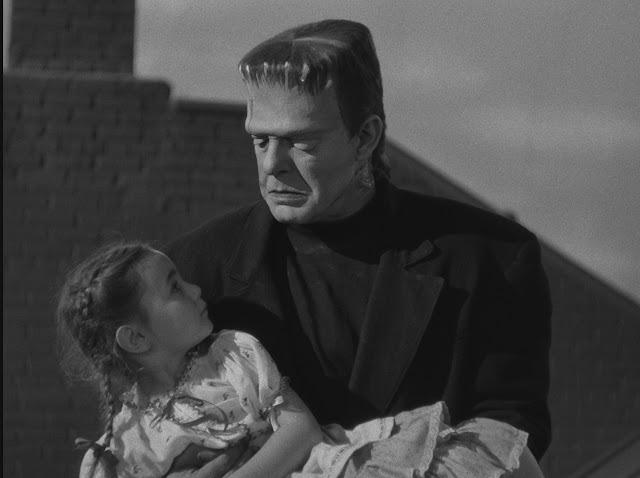 Though a brute when he's injured or riled,
This galoot would be winsome and mild
It seems strange but explains
His exchanging of brains
With this cute little innocent child.

In The Ghost of Frankenstein (Erle C. Kenton; 1942), the Monster (Lon Chaney Jr) is obsessed with Cloestine Hussman (Janet Ann Gallow). Title by meaty David Cairns.
Posted by surly hack at 3:30 AM No comments:

Lecher In the Rhyme 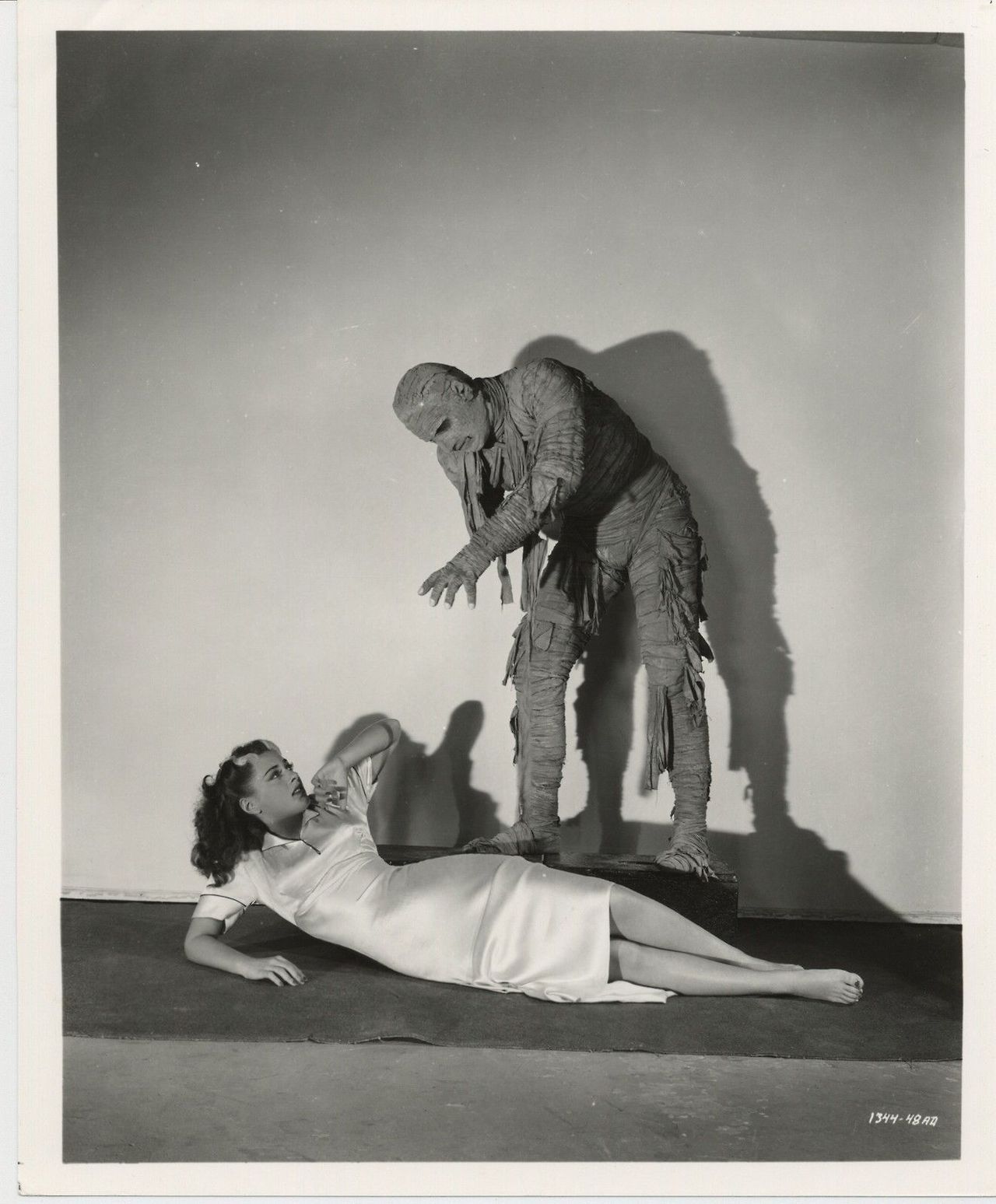 Consider this rotten old coot
He's all id when he spots someone cute
He looks haggard and grim
And though dragging a limb
Lift his lid, and he's hot in pursuit.

Lon Chaney Jr and Ramsay Ames pose in a still for The Mummy's Ghost (Reginald Le Borg; 1944).
Posted by surly hack at 3:30 AM No comments: 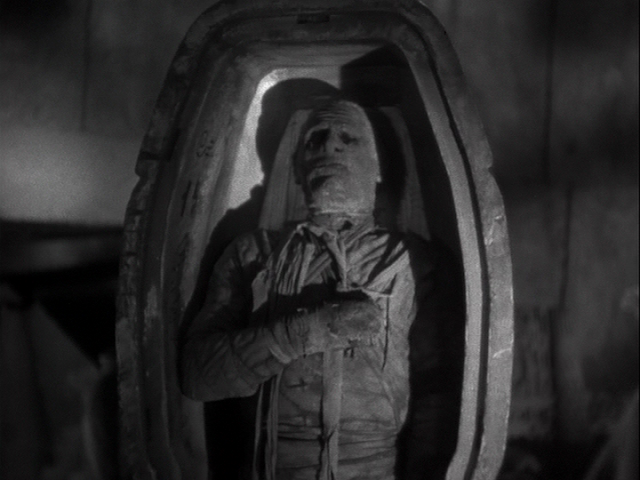 In a tomb kept a secret he'd slept
From that room, his joints creaking, he's crept
Then he dies at the close
Though he'll rise, we suppose
To resume in the sequels inept. Its tomb bears a terrible curse
Exhume, and beware the perverse
What you think long since died
Has been shrink-wrapped and dried
Inhuman, it scares up this verse.

Dick Foran, Peggy Moran and Charles Trowbridge dare to raise The Mummy's Hand (Christy Cabanne; 1940)
Posted by surly hack at 3:30 AM No comments: 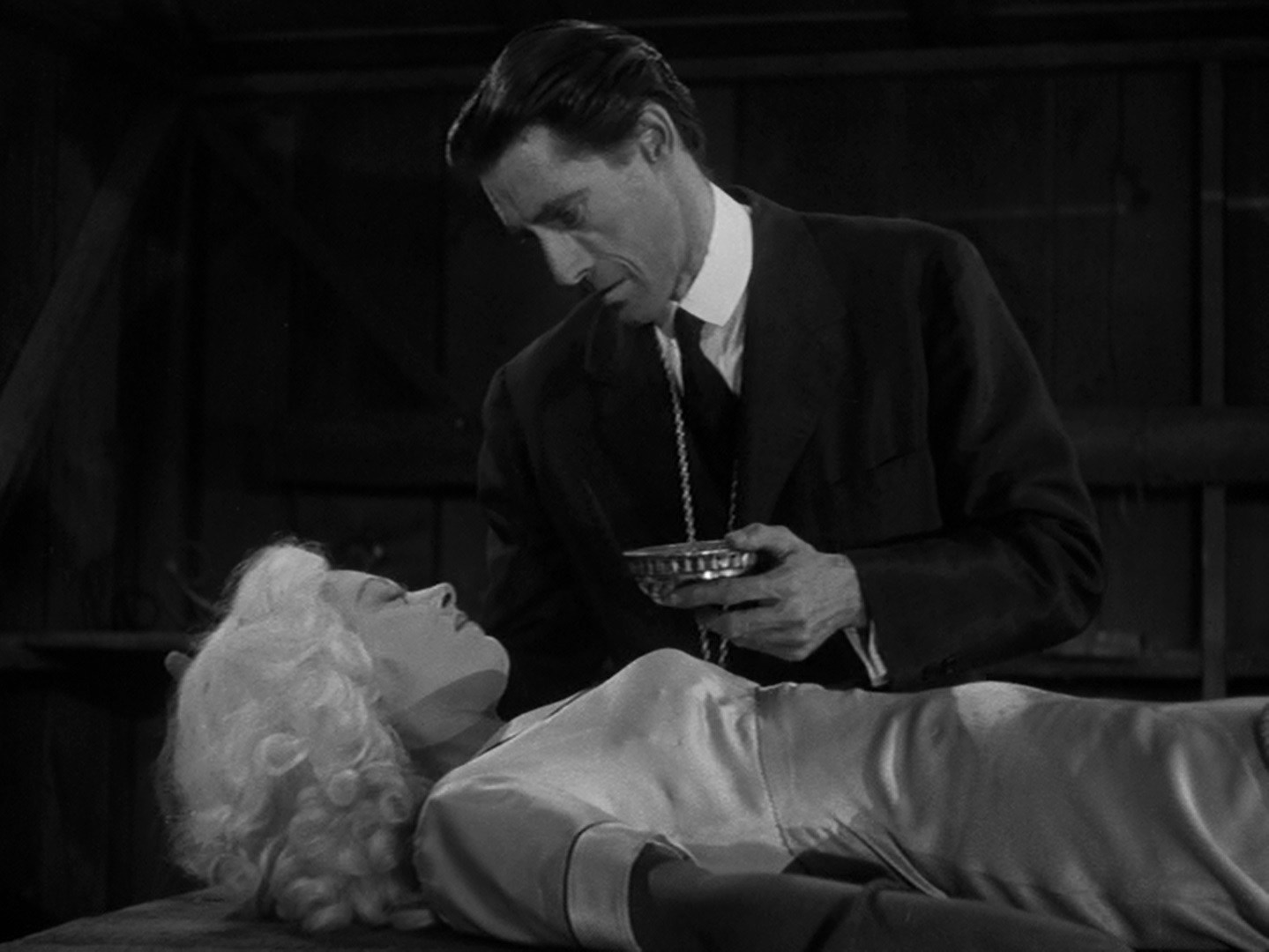 Take a sip, you'll feel hale and awake
Just one nip cures that ailment or ache
But you're wary of drinks
Poured by scary old finks
And you're hip to odd males on the make.

The Mummy's Ghost (Reginald Le Borg; 1944): High Priest Yousef Bey (John Carradine) admires the reincarnated princess Ananka (Ramsay Ames), and wants to keep her young for himself.
Posted by surly hack at 3:30 AM No comments: The mummy sips only that tea
While Dracula's choice is Type B.
The monster's not choosy;
If you offer booze, he
Will grunt "What you drink fine with me!"

Boris Karloff hits the sauce in Bride of Frankenstein (James Whale; 1935). Franken-Fridays is loaded...with limericks.
Posted by surly hack at 3:30 AM No comments:

The Ra of Unintended Consequences

Their dream is to loot ancient purses,
They scheme despite hieroglyph curses,
Good sense overriding
But also providing
Our team with occasion for verses.