Fritz works when the moon sheds its light
He's a jerk, a buffoon, and a blight
The dipstick will crack
His whip on your back
This quirkiest goon isn't 'right'.

Dwight Frye, Boris Karloff and Colin Clive in Frankenstein (James Whale; 1931). It's Dwight Frye-Days at LimerWrecks.
Posted by surly hack at 3:30 AM No comments: 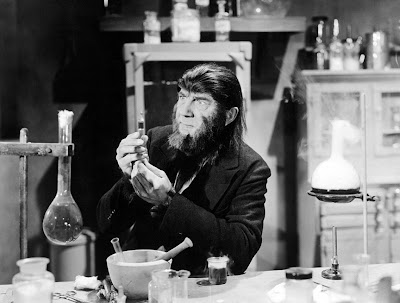 Half-human, he's very depressed
Was doomed when he dared to self-test
He knew it was risky
But soon he grew frisky
One assumes it put hair on his chest.

Doc Brewster (Béla Lugosi) turns himself into The Ape Man (William Beaudine; 1943).
Posted by surly hack at 3:30 AM No comments: 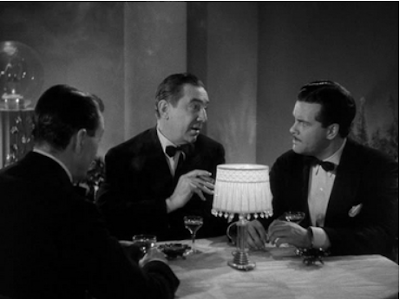 In a show about criminal rats,
Fast dough, faster women and gats,
Lugosi's adrift
With lowlifes and grift
And the going gets grim without bats. Is Lugosi affecting a limp?
Does he mosey erect like a chimp?
Is that fur at his cuffs
That's emerging like ruffs?
Heaven knows he's bedecked like a simp.

Béla Lugosi sports a frock coat in The Ape Man (William Beaudine; 1943).
Posted by surly hack at 3:30 AM No comments:

There's Something About an Aqua Velva Plan 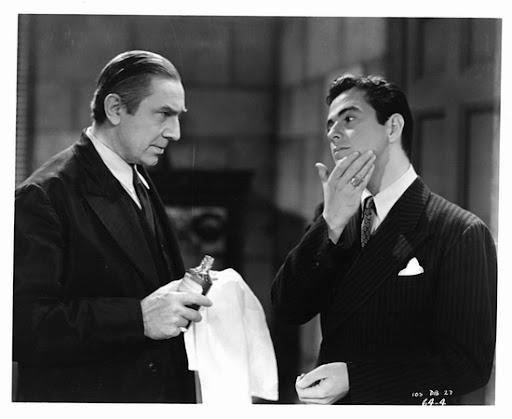 Innocuous aftershave lotion,
Or noxious and crafty new potion?
Just a pat on the face
And a bat will give chase
This blockhead once laughed at the notion. 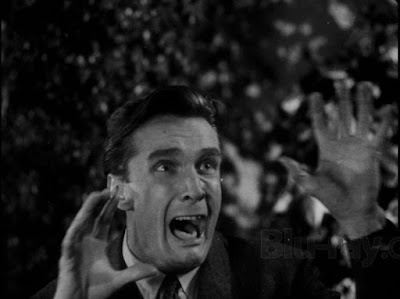 Béla Lugosi, Alan Baldwin and John Ellis in The Devil Bat (Jean Yarbrough; 1940). Lugosi plays a scientist who develops and aftershave lotion that attracts a gigantic killer bat. Title by aquatic Donald B. Benson.
Posted by surly hack at 3:30 AM No comments:

She started her days as a doodle
A cartoon portraying a poodle
Then her form was revised
Anthro-po-morphised
To party, and sway and canoodle.

Image: Dizzy Dishes (Dave Fleischer; 1930). Introduced in 1930 as a nameless poodle (note the ears) dressed in flapper fashions, the original Betty was the girlfriend of established Fleischer star pooch, Bimbo. In 1931, New Yorker Mae Questel took over vocal duties for Betty, providing her trademark squeaky voice. The following year, the character was officially christened as Betty Boop and assumed her more familiar human form, although she maintained her romantic interest in Bimbo for several films.
Posted by surly hack at 3:30 AM No comments:

Smitten With a Whip

With a whip he's a cranky young guy
He lets rip till you're spanked and could cry
But his newly-found status
Is due for hiatus
Soon you'll grip him and yank him up high.

Dr. Waldman (Edward van Sloan) and Henry (Colin Clive) discover that the Monster (Boris Karloff) has hung Fritz (Dwight Frye), using the whip Fritz had lashed him with. Frankenstein (James Whale; 1931)
Posted by surly hack at 3:30 AM No comments:

Count Drac as a Hollywood hood?
Does he smack around molls like he should?
Does he wear a fedora?
Maybe scare Nick and Nora?
Then crawl back into squalor for good?

There's Morphine Where That Came From

Quite at ease playing zany neurotics,
Japanese, or else any exotics
This character star
From the bar won't stray far
As he freezes his brain with narcotics.

According to The Lost One: A Life of Peter Lorre, as a young man, Lorre suffered a ruptured appendix and underwent surgery. When a second surgeon treated further complications in 1925, he prescribed morphine to soothe the discomfort. This was the beginning of Lorre's lifelong dependence on morphine. Image: The Lost One (Peter Lorre, 1951)
Posted by surly hack at 3:30 AM No comments:

With an accent incredibly thick
Bela lacks in street cred, sounds ridic
Racketeering's not right
Drac seems weird, without bite
His attacks cause no dread in this flick.

Béla Lugosi as your standard Hungarian gangster in Black Friday (Arthur Lubin; 1940).
Posted by surly hack at 3:30 AM No comments:

Three menaces bend in a huddle
Old friends, with their tendrils they cuddle
And, brandishing knives
And handguns, the lives
Of enemies end in a puddle.

Baddies Peter Lorre, Bela Lugosi, and Boris Karloff conspire in You'll Find Out (David Butler; 1940).
Posted by surly hack at 3:30 AM No comments:

She Boops to Conquer 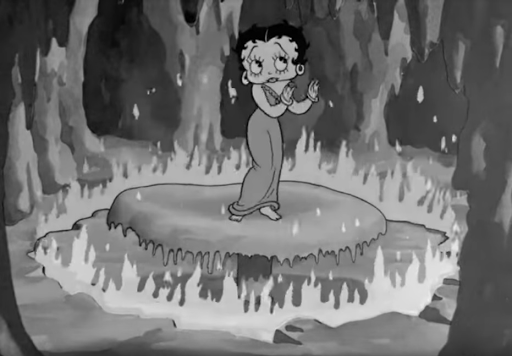 From days of the pre-code hot mama
To sex symbols in Cinerama,
The tangiest poon
In any cartoon
Was Betty, the feline's pajama.

Hail to the Thief

Groucho's pumped up with power in "Duck Soup"
They blast trumpets, strew flowers, loudly whoop
But no prince, he's a heel
He'll throw insults and steal
Like that chump in his tower - what a poop!

Top: Zeppo and Groucho Marx in Duck Soup (Leo McCarey; 1933); Above: Mike Pence and Donald Trump in Beelzebub Over the White House (Alan Smithee; 2017).
Posted by surly hack at 3:30 AM No comments: A profane little ditz and what's more
Mundane little Fritz ain't top-drawer
The guy's unprepared
By surprises is scared
Which explains why the brain hits the floor.

Dwight Frye as Fritz in Frankenstein (James Whale; 1931). Drop everything, it's Dwight Frye-Days.
Posted by surly hack at 3:30 AM No comments:

It's rotten and witless "suspense"
The plotting omits common sense
Though they shot it in color
It could not be much duller
Not a lot at such little expense. 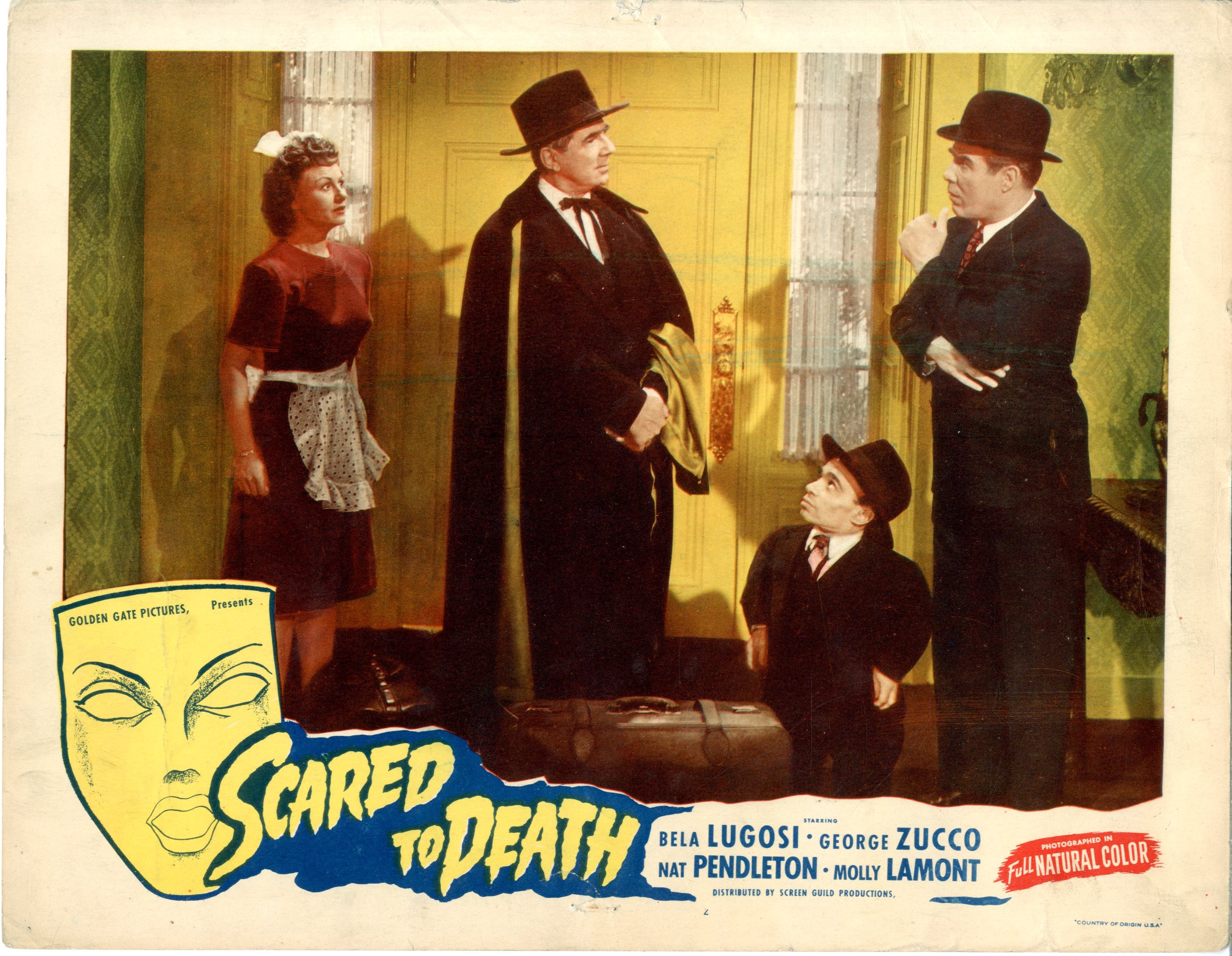 Lobby cards for Scared to Death (Christy Cabanne;1947). Top: Béla Lugosi, Molly Lamont; Above: Gladys Blake, Lugosi, Angelo Rossitto, and Nat Pendelton. One of only two color films with Lugosi, and the only one with him as a star. It's awful, but it does contain a few eerie visual bits, caught here. Title by nifty Donald B. Benson.
Posted by surly hack at 3:30 AM No comments:

The Apes of Wrath

A criminal scientist/monkey
And his simian, spine-snapping flunky
Two screwballs who kill
Tap fluids at will
It's flimsy, it's minor, it's clunky.

Dr. James Brewster (Bela Lugosi) spots his next victim in The Ape Man (William Beaudine; 1943). With Emil Van Horn in the ape suit. A Monogram release.
Posted by surly hack at 3:30 AM No comments:

Play Mystic For Me 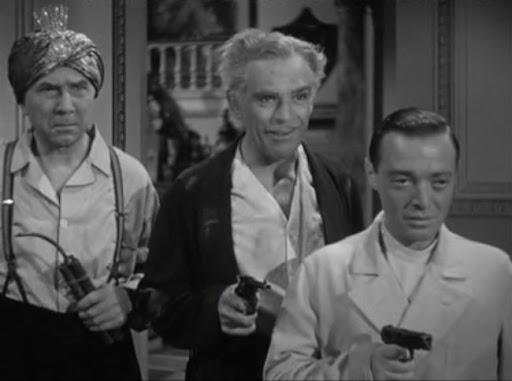 Don't doze near Lugosi the mystic
Lord knows the old pro goes ballistic
The guy gets his kicks
With dynamite sticks
And those who oppose turn statistic.

Bela Lugosi, Boris Karloff and Peter Lorre do their best to enliven the wretched Kay Kyser comedy, You'll Find Out (David Butler; 1940).
Posted by surly hack at 3:30 AM No comments: 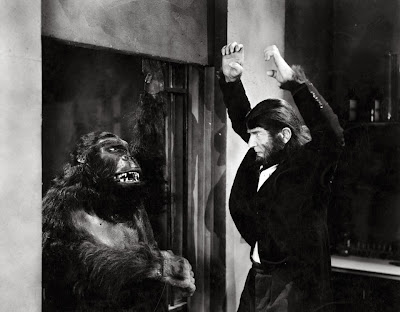 The perverted old quack flips his wig
Now a spurt from your back he would swig
But before this ordeal
He gets floored by Emil
And his vertebra crack like a twig.

Emil Van Horn is the man in the ape suit, hench-monkey to Béla Lugosi, The Ape Man (William Beaudine; 1943). Attempting to reverse his condition, Lugosi injects the spinal fluid from his murder victims. Makes sense to me. Title by Donald "B for Brokeback" Benson.
Posted by surly hack at 3:30 AM No comments: 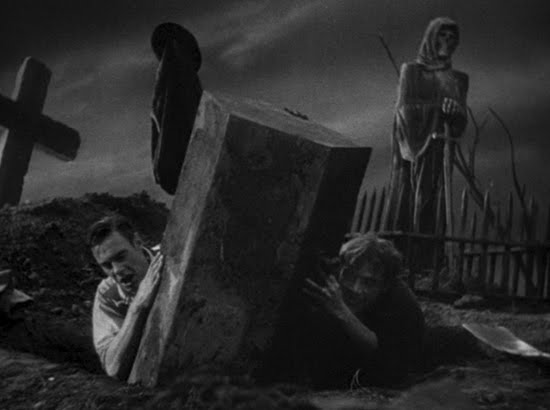 You'd wager the slob's not too bright
Engage him for jobs done by night
Low-rung, not topnotch,
He'll bungle and botch
Enraged torch-lit mobs will make right.

Colin Clive and Dwight Frye in Frankenstein (James Whale; 1931). Dwight Frye-Days does the dirty work at LimerWrecks.
Posted by surly hack at 3:30 AM No comments:

Our Beast is None Too Good 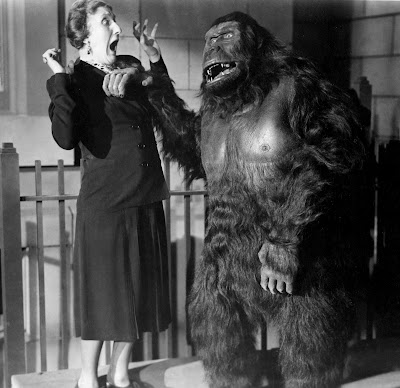 Be wary of primates hirsute
Take care when you eye a large brute
They're feral and wild
But hairy and mild?
Who's scared of a guy in a suit?

Minerva Urecal and Emil Van Horn in The Ape Man (William Beaudine; 1943). Urecal pays the sister of star, Béla Lugosi, the mad doctor of the title. You might know her as "Mother" on the TV series Peter Gunn. Title by Donald "Beastly" Benson.
Posted by surly hack at 3:30 AM No comments: 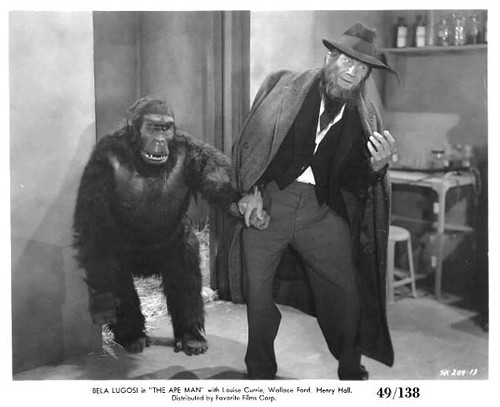 This doctor's a cheap missing link
A schlocky old B movie fink
Commits crimes in a spree
Then he climbs in a tree
The blockhead should see a good shrink.

Not at Home on the Range

On attractive young hotties he dove
And snacked on carotids, by Jove!
He was scary, exotic
And his stare was hypnotic
Now Dracula plots by a stove.

Anne Nagel and Bela Lugosi in a lobby card for Black Friday (Arthur Lubin; 1940).
Posted by surly hack at 3:30 AM No comments: 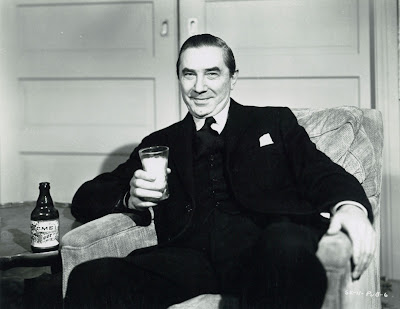 In Horror, as Drac he would roam
Post-gore, he relaxed at his home
He'd open a beer
With cold cuts -- a schmear --
And pour it for maximum foam.

The theft didn't go as he planned
He was effed by a bony left hand
This one's beastly, insane
But at least it's a brain
And bereft, Fritz just knows he'd be canned.

It's Dwight Frye-Day! Frankenstein (James Whale; 1931). Title by brainy Donald B. Benson.
Posted by surly hack at 3:30 AM No comments:

An Accent to Grind

Here's Bela, top-billed in a gang
What fells him is villainous slang
His tongue in a tangle
He'll bungle and mangle
No telling what fills each harangue.

Black Friday On My Mind

Trading brains is a dangerous game
Though it's plain, when exchanged, there's acclaim
But the sad old recipient
Finds madness incipient
Goes insane, quite deranged. It's a shame.

Boris Karloff and Anne Gwynne in Black Friday (Arthur Lubin; 1940). Karloff''s character transplants the brain of a gangster into a bookish college professor. Writer Curt Siodmak would revisit this theme again in his novels Donovan's Brain and Hauser's Memory, as well as several screenplays.
Posted by surly hack at 3:30 AM No comments: