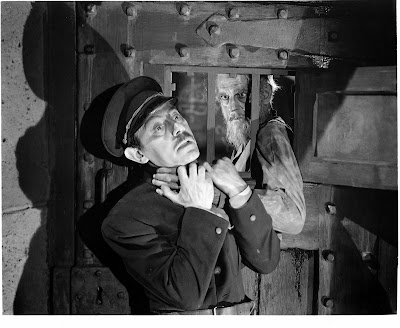 Boris switched to creator from creature
He's a witch doc, through grates he's a reacher
Choking Chuck for his chalk
(Squelched, he can't squeak or squawk)
In a kitschy third-rate second feature.

Boris Karloff, having played the monster thrice, becomes a mad scientist who establishes his villainy in House of Frankenstein (Erle C. Kenton; 1944) by throttling prison guard Charles Wagenheim just to get a piece of chalk.
Posted by surly hack at 2:00 AM