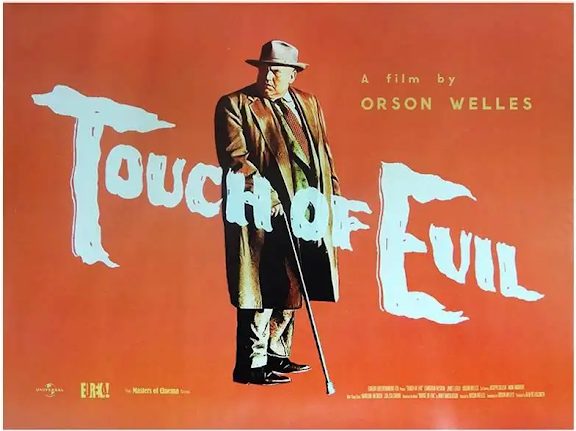 Sheriff Hank gave up booze, now eats candy
When he drank he'd get woozy on brandy
Though he limps through this thriller
He's no gimp, he's a killer
And he strangles that loser Joe Grandi.

Orson Welles is Sheriff Hank Quinlan in Touch of Evil (Welles; 1958). Quinlan carries a cane, and he leaves it behind after strangling Joe Grandi, played by Akim Tamiroff.

David Cairns notes that various observers have commented on Welles being undone by his cane/Kane. But David might be the only one to point out that Welles freezeframes the hotel door sign saying Make Sure You Haven't Left Any Belongings Behind.
Posted by surly hack at 3:30 AM