Like Marat, Waldo writes in the tub
Each bon mot he types smites like a club
This most vicious old queen
Like a fish, epicene,
Soaks his rottenness, rub a dub dub. 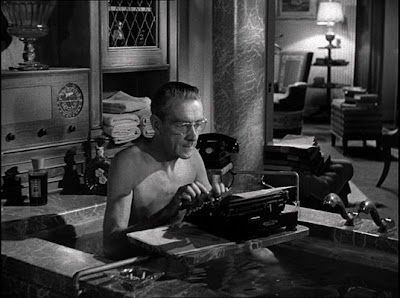 Absent from movie screens since 1930, actor Clifton Webb returned to film as acerbic columnist and radio personality Waldo Lydecker in Laura (Otto Preminger; 1944). Webb as Lydecker has many memorable lines in the film:


“I don’t use a pen. I write with a goose quill dipped in venom.”
“I’m not kind, I’m vicious. It’s the secret of my charm.”
“In my case, self-absorption is completely justified. I have never discovered any other subject quite so worthy of my attention.”
Posted by surly hack at 2:00 AM